“The great spirit is our father, but the earth is our mother.

She nourishes us; that which we put into the ground she returns to us, and healing plants she gives us likewise.

If we are wounded, we go to our mother and seek to lay the wounded part against her, to be healed.

Animals too, do thus, they lay their wounds to the earth. 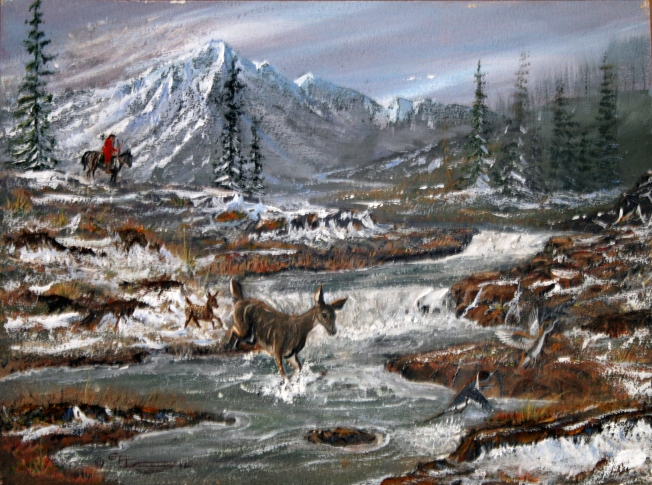 When we go hunting, it is not our arrow that kills the moose however powerful be the bow; it is nature that kills him. The arrow sticks in his hide; and, like all living things the moose goes to our mother to be healed. He seeks to lay his wound against the earth, and thus he drives the arrow farther in. Meanwhile I follow. He is out of sight, but I put my ear to a tree in the forest, and that brings me the sound, and I hear when the moose makes his next leap, and I follow.

The moose stops again for the paint of the arrow, and he rubs his side upon the earth and drives the arrow farther in. I follow always, listening now and then with my ear against a tree. Every time he stops to rub his side he drives the arrow father in, till at last when he is nearly exhausted and I come up with him, the arrow may be driven clean through his body… ”

The Great Spirit is in all things. He is in the air we breathe. The Great Spirit is our Father, but the Earth is our Mother. She nourishes us…..That which we put into the ground she returns to us.
— Big Thunder (Bedagi) Wabanaki Algonquin

The land is sacred. These words are at the core of your being. The land is our mother, the rivers our blood. Take our land away and we die. That is, the Indian in us dies.
— Mary Brave Bird

The ground on which we stand is sacred ground. It is the blood of our ancestors.
— Plenty Coups, Crow

Mountain men were so much more than just fur trappers, they were explorers who traversed and traveled routes previously unknown, paving the way for future generations to move westward. Today, many view manifest destiny with a jaundiced eye, ashamed of the conquering and taming of the vast wilderness that is America; however, for good or bad, these men earned their place in history with their undaunted courage and zest for exploration. 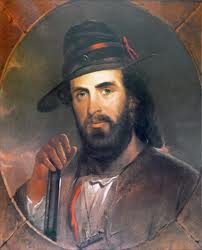 While a trip undertaken with any one of the approximately 400 known mountain men, would have made for an exciting, dangerous journey – there is one man who stands out for his leadership and bravery. This man isn’t as well known as Kit Carson, Jedediah Smith or Jim Bridger, but for miles traversed and men lost, his record stands above them all. He may well have been the greatest mountain man of all time.

The annals of history have given little credit to Joseph Rutherford (Reddeford) Walker for his achievements, but he is one man I would have followed to the Pacific and back. Walker was a tough but fair man whose heritage included extended family ties with Andrew Jackson and Sam Houston as well as a stint as sheriff in Jackson County, Missouri, while living in Independence – a major starting point for the Santa Fe and Oregon trails.

Walker lived with the Snake Indians for about fifteen years, later married a Shoshone woman, his almost constant companion for at least ten years (it is believed she and their children died from cholera) and his ties to the Shoshone and Snake Indians may well explain why he encountered few troubles with them. Walker was never one to embellish stories or tell wild tales, to the point of not taking credit for many of his discoveries. 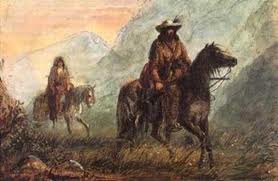 Bourgeois and Squaw
by Alfred Miller

Daniel Conner, a member of the Walker party in Arizona, kept a journal detailing his experiences. This is what he wrote about Joseph Walker:

“I was with him [Walker] two years of his last explorations of our mountain country under the most desperate hardships and still I could never see any change in him. Always cool, firm, and dignified. “I never heard him tell any wonderful story. He was too reticent about his certainly bleak and wild experiences and he was never given to saying foolish things under any circumstance. Brave, truthful, he was as kindly as a child, yet occasionally he was ever austere. I was but a boy and he kept me out of dangerous places without letting me know it or even know how it was done. “. . . my greatest concern is the fear that his character will never be known as well as it ought to be. His services have been great and unostentatious, unremunerated and but little understood. Modesty was his greatest fault.”

His known achievements include:
1821 – Part of the first wagon train to Santa Fe
1826 – Guide and hunter for the Santa Fe Trail Survey
1832 – Led first wagons over South Pass
1833 – Was the first to cross the Great Basin via the Humboldt River
1833 – First to see Yosemite
1833 – Explored a large portion of the California Trail
1834 – Discovered Walker Pass across the Sierra Nevada Mountains
1834 – Created the first concept and outline of the Great Basin
1834 – Led the first wagons into Owens Valley, California
1845 – Guided the third Fremont Expedition into California
1861 – Discovered the gold fields in Prescott, Arizona (As a direct result President Lincoln, et. al. created the Arizona territory)

Joseph Walker was one of the few mountain men to die of old age (74 years), and fittingly, he is buried in the Alhambra Pioneer cemetery near Martinez, California.

Sweet Sophistication with a Touch of Whimsy

Stitching my life together